skip to main | skip to sidebar

How to edit the hosts file in Mac OS X – Leopard

Either by start typing Terminal on the Spotlight, or by going into Applications -> Utilities -> Terminal.

Open the hosts by typing on the Terminal that you have just opened:
view source
print?

The hosts file contains some comments (lines starting with the # symbol), as well as some default hostname mappings (e.g. 127.0.0.1 – localhost). Append your new mappings underneath the default ones. Or edit one of the default values

You can navigate the file using the arrow keys.

Step 4 – Save the hosts file

When done editing the hosts file, press control-o to save the file. Press enter on the filename prompt, and control-x to exit the editor.

On Leopard you can issue a simple Terminal command to flush the DNS cache, and have your host file changes to take immediate effect: view source print?

You can now test your new mapping on the browser!
Posted by martinog at 9:47 AM No comments:

My iPhone 3G is finally upgraded and synched with my Windows iTunes 8.2 running with Parallels 3 on my MacBook Pro. It wasn't easy but I fially figured out that I must run the USB ports in guest mode when synching my iPhone. I will eventually upgrade to Parallels 4, but that will be at a later date.
Posted by martinog at 1:34 PM No comments: 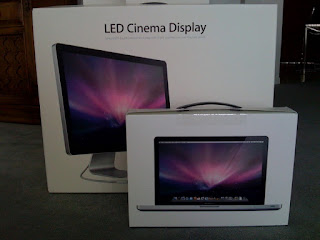 Posted by martinog at 1:39 PM No comments:

Yes, in 2009, I am retiring my PC laptop and and going to use an Apple MacBook Pro for my main machine. I still need to run Windows since I'm not ready to divorce Microsoft Outlook yet, so I'll be running Parallels.

At the end of December, I went to the Apple Store and bought the following:

This blog is about my experiences switching from Windows to the Mac. This includes Parallels Coherence Mode, Managing Parallels Devices and Windows Mac File Sharing. It's also about the peripherals and migration issues because my iPhone, iTouch and iPod are now working perfectly fie. I'm a frequent iTunes music purchaser and my music is all stored on my PC laptop.

This is my second attempt to switch from a PC to a Mac. Last year to switch to the 13" MacBook, but the screen was just too small.

This is an amazing computer. I believe it's the best 15" Apple laptop you can buy! In addition, with the 24" flat panel display for my office, it makes it the "Porsche" or "Ferrari" of computing power and elegance!

I am looking forward to using this computer in 2009!
Posted by martinog at 1:10 PM No comments:

martinog
I live in South Florida.